A thermoelectric cooler is a solid-state device made from two alumina ceramic plates with an array of metallized pillars in between.  The pillars are also ceramic--they're made of alternating p-type and n-type bismuth telluride (Bi2Te) semiconductors, alloyed with antimony telluride (p-type) or bismuth selenide (n-type), and connected in series electrically.  The Peltier effect makes them electric-powered solid state heat pumps.   (Thermocouples work the other way round, via the Seebeck effect, but the physics is the same.)

A recent review paper gives an interesting look at the state of the art and the many open questions in thermoelectric research.  (You wouldn't think that solid-state beer fridges had such interesting physics inside, but they do.) 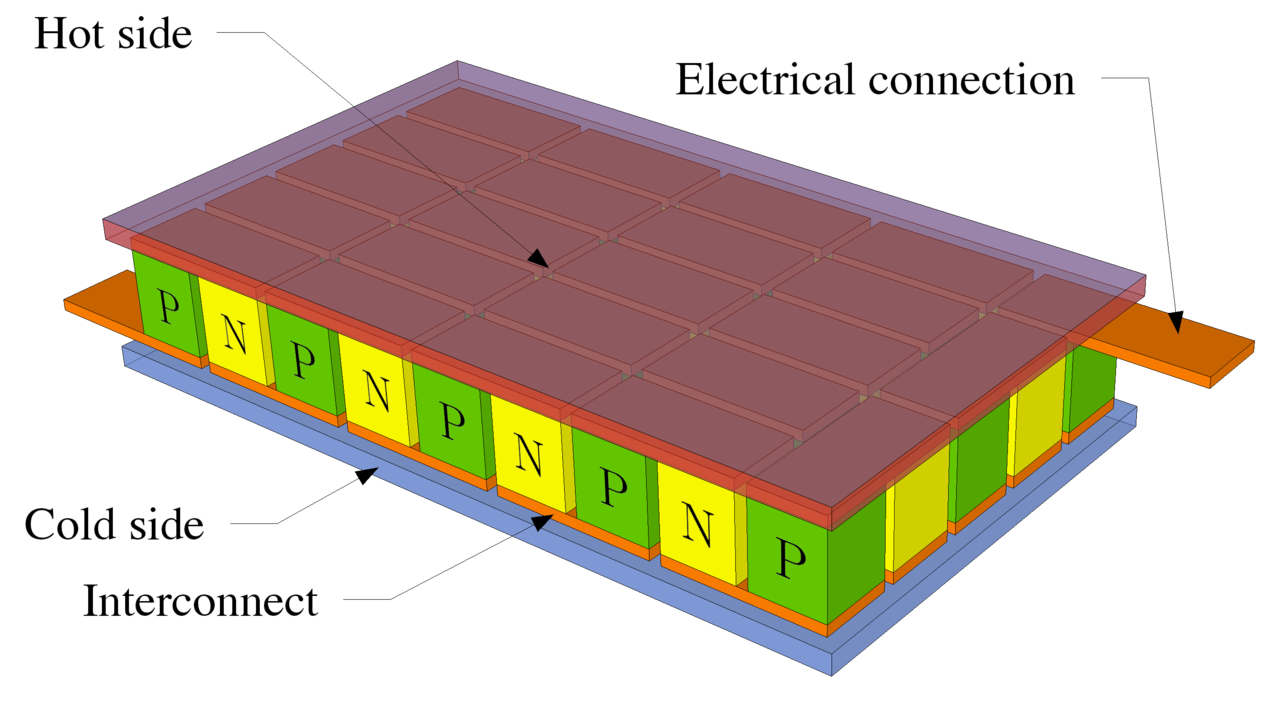 (Source: Wikimedia Commons.  Note that real TECs have an even number of pillars so that both wires attach to the hot side, avoiding a massive heat leak through the heavy copper wire.)

They're easy to use: apply a current in one direction and heat moves from the top to the bottom side; switch directions and heat flows the other way.  There are some finer points, of course

For instrument use, we have to keep in mind one much less well-known property of TECs:

I just put a piece of 1-inch self-adhesive copper tape on the cold side of a typical 30-mm Marlow TEC, and measured 67 pF from there to the wiring, about 10 pF/cm2. A PWM (Class D) driver would put a few volts at maybe 100 kHz across that, with probably 30-ns edges.  The resulting charge injection spikes would be around
(3 V / 30 ns)× 67 pF ~ 7 mA,
and maybe much worse.  There are a lot of synchronous buck regulators out there whose switching edges are considerably faster than a nanosecond, which would put the spikes up near an amp.

Fast spikes that large will reliably make a mess of an ultrasensitive measurement, and that puts us in a dilemma.  PWM control is too noisy, and even the usual one-or-two-section LC filter probably won't be enough for a low-noise laser or photoreceiver.  On the other hand, old-timey Class-AB linear control wastes power and generates even more heat.  What to do?  One of EOI's building-blocks is a Low Noise Class-H TEC Driver, which gives the best of both worlds.

A Class-H amplifier is a linear amp running off a fast-responding switching power supply.  The supply voltage is maintained just high enough for the linear amp to work properly, maybe 0.1 V of headroom.  If the TEC needs 3 A at 1.3 V, the supply runs at 1.4 V instead of probably 5 V for a pure linear controller.  That cuts the power dissipation in the linear amp from (5 V - 1.3 V)*3 A = 11 W down to 300 mW, a saving of 97%.  In addition, our design draws on decades of experience in low-noise analog electronics, and so is able to cut the remaining switching spikes down by over 100 dB, to levels that are hard to measure.  Since the TEC itself is dissipating 4 W or so, this is an excellent tradeoff. (If you're interested in all this amplifier-class business, I recommend this Circuit Cellar article by Robert Lacoste.).  Our linear amps are class-AB, with a proprietary reactive-feedback topology that drops the headroom requirement to absolute rock bottom while maintaining very high spike rejection.

The Low-Noise Class-H TEC driver comes in two versions, both of which supply very quiet, stable current-mode drive and millikelvin temperature stability.  The simpler one is best for detection systems, which require cooling well below ambient temperature but don't need heating.  Thus the driver's output works in one quadrant, with its output voltage and current both positive.  It's simple, inexpensive, and takes up only 1 square inch of board space including the switching supply. (It's best if the switcher is on the other side of the ground plane--we actually use one of those subnanosecond switchers, the LMR23630, because it's small and efficient, and its noise doesn't hurt us.)

On the other hand, stabilized diode lasers generally work near room temperature, and so need both cooling and heating.  Furthermore, lasers get turned off and on, and some are modulated, so that the thermal load on the cold plate is highly variable.  This requires four-quadrant operation in general.  Thus our more advanced TEC controller uses a symmetric current-conveyor topology that easily copes with whatever the laser is doing.  The cost increase is only about 25%, and the board space about another half square inch, so either one can easily fit in a tight package with equally tight cooling and cost constraints.

Because of our engineering ethos and long experience in instrument design, we achieve this high performance and small size without using a lot of fancy parts, resulting in very low BOM cost.  Any licensing cost is a small fraction of the money saved on the parts, so everybody wins.

Give us a call if you have an application we might be able to help with!